Over US$227 Million Proposed for Radial Canal Dredging in HCMC 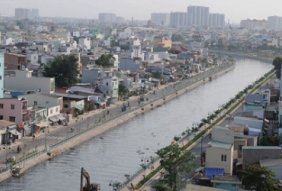 The project, developed by a joint stock company, will dredge eight kilometers of radial canals, improve environment and build canal alongside roads and box sewer system to improve water drainage in surrounding areas.

It is scheduled to complete after five years of implementation.

Formerly, the Japanese International Cooperation Agency said that the project aimed to improve the environment and develop traffic infrastructure, therefore Japan might loan 70 percent of the total capital, about VND3,500 billion, if at least one Japanese investor attended in the project.

About 1,620 households are living along radial canals and affected by pollution there.