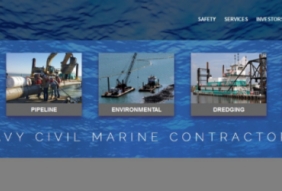 “As previously discussed, significant cost increases on five projects managed out of our Tampa, Florida office, as well as one-time, non-cash charges related to the assets held for sale, along with a valuation allowance on our deferred tax asset in Florida significantly impacted our third quarter results,” said Mark Stauffer, Orion Marine Group’s President and Chief Executive Officer. “I am confident we are rectifying the issues with our Tampa operations. However, I would to highlight that the rest of our operations performed well during the quarter, including our recently acquired commercial concrete segment, which exceeded our expectations. During the third quarter we had a solid success rate on new work leading to backlog of over $400 million as of September 30, 2015. Additionally, we continue to see strong opportunities for new work throughout our market areas, which gives us confidence in the year ahead. There is no doubt the third quarter has been a disappointment, but I am confident 2016 will be a solid year for the Company with significantly improved bottom line performance.”

Financial highlights of the Company’s third quarter 2015 include:

Backlog consists of projects under contract that have either (a) not been started, or (b) are in progress and not yet complete, and the Company cannot guarantee that the revenue projected in its backlog will be realized, or, if realized, will result in earnings. The Company reminds investors that backlog can fluctuate from period to period due to the timing and execution of contracts. Given the typical duration of the Company’s projects, which generally range from three to nine months, the Company’s backlog at any point in time usually represents only a portion of the revenue it expects to realize during a twelve-month period.

“We remain excited with the market opportunities we see as we look towards 2016,” said Mr. Stauffer. “With the management issues in our Tampa office being rectified, an ample bid market for both the Heavy Civil Marine Construction and Commercial Concrete Construction segments should support improved results in 2016.

“Demand for our Heavy Civil Marine Construction services remain strong. As I have previously mentioned, we continue to see solid demand for turn-key solutions from our private sector customers in the energy sector. Currently being driven by increased need for waterside storage for domestically produced crude oil, we believe similar opportunities in the future will also be driven by the continued expansion of petrochemical and LNG facilities, as well as the potential for crude exports. Opportunities from local port authorities also remain solid, many of which are related to the upcoming completion of the Panama Canal expansion project. Additionally, we expect to see bid opportunities related to coastal restoration through RESTORE Act funding towards the end of 2016.

“The Commercial Concrete Construction segment also continues to see a robust bid market in both Houston and Dallas. Demand for the construction of warehouses, industrial facilities, retail establishments, medical facilities and schools continues to grow as the populations of Houston and Dallas continue to expand. With over $460 million in bids outstanding and near record backlog, we expect 2016 to be another positive year for this segment. We also continue to explore potential opportunities for further expansion of services in Texas and potential opportunities to bring both our heavy civil marine and commercial concrete construction services to be bear on projects”