On the move: US Army Corps of Engineers 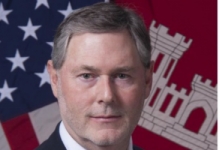 Henry “Hank” McDevitt of Clinton has been selected as the new deputy to the commander of the U.S. Army Engineer Research and Development Center in Vicksburg. McDevitt, a Vicksburg native, has bachelor’s and master’s degrees in civil engineering from Mississippi State University. He also served as an adviser to several U.S. agencies and military units. McDevitt began his career at the ERDC-Waterways Experiment Station in July 1983 as a research structural engineer in the Structural Mechanics Division, part of the former Structures Laboratory. He also previously served as the lead project engineer on the Advanced Silo Hardness Test Program, sponsored by the former Defense Nuclear Agency before transferring to the SL’s Explosion Effects Division to begin working on military projects. In November 2000, McDevitt was named branch chief of the Impact and Explosion Effects Branch and also served a three-month assignment in 2012 as acting deputy director of the Geotechnical and Structures Laboratory.