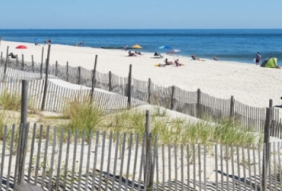 The Long Beach Island Historical Museum was packed Monday evening, Sept. 14, with local residents of Beach Haven and surrounding towns who were eagerly seeking information about the upcoming beach replenishment that the borough has been awaiting. As part of the town council’s regularly scheduled monthly meeting, officials from the N.J. Department of Environmental Protection’s Bureau of Coastal Engineering and the U.S. Army Corps of Engineers’ Philadelphia District provided a detailed overview of the Long Beach Island New Jersey Hurricane and Storm Damage Reduction Project, designed to reduce storm damages to infrastructure.

Replenishment in Beach Haven as well as in the Holgate section of Long Beach Township will begin in January and continue for approximately 100 days, officials announced, answering a question that had many residents waiting on the edge of their seats. It will be a 24-hour operation, seven days a week, with beach closings at approximately 1,000-foot sections. Closed sections are rolling and will advance as beachfill continues. Construction is anticipated to progress approximately 100 feet per day. Project features include sand fencing, dune grass plantings and dune grass crossovers.

The project, conducted by Great Lakes Dredge and Dock Co. through a $128 million contract, began in Ship Bottom in early May. Construction then moved to Long Beach Township, and work is ongoing in the Brant Beach section of the municipality. The timeline for replenishment in the remaining sections of the township is still pending, said Chris Constantino, NJDEP project manager.

All work is required to be completed by April 12, 2016. Weather and/or mechanical delays may change the schedule and completion date. Despite possible delays, all parts of the project will be fulfilled, Keith Watson, the Army Corps’ project engineer, noted.

Once the project is complete, approximately 63,000 linear feet of beach and dune will have been constructed across the Island, including 9,940 feet in Beach Haven. To meet the profile, more than 8 million cubic yards of sand will have been pumped onto the beaches of LBI from an approved borrow area approximately 3 miles offshore. Around 2.5 million cubic yards will be in Beach Haven and Holgate.

The state is in the process of consulting with the necessary groups involved with receiving authorization to utilize a portion of the Little Egg Inlet as a borrow area, officials said. A final decision, which could potentially allow the procedure to be included in the current Army Corps project, has not yet been made. If sand were to be obtained, it would be used to fill the whole beach profile, not just as a top layer, said Watson.

The storm damage reduction project was only partly finished when Superstorm Sandy hit in 2012. The Army Corps completed construction in Surf City in 2006, Harvey Cedars in 2010 and Brant Beach between 31st and 57th streets in Long Beach Township in 2012. It restored beaches in Surf City and Harvey Cedars following Hurricane Irene in 2012, and entirely refurbished the beaches within all three municipalities in 2013 after Sandy. The work was financed fully by the Army Corps’ Flood Control and Coastal Emergencies program.

The current contract will complete the initial construction of the dune and berm system. It is entirely funded by the federal government through the 2013 Disaster Relief Appropriations Act (PL113-2), generally acknowledged as the Hurricane Sandy Relief Bill. Following the conclusion of initial construction, the project is eligible for continued periodic nourishment.

Residents and visitors in Beach Haven can expect to see offshore dredges outfitted with an intake screen, a pipeline in the water from the dredge connection point to the beach, a pipeline on the beach in different locations and land-based screens for debris collection as well as heavy machinery used to spread sand and move equipment.

Some existing vegetation may be covered and disturbed during the development. However, officials said they have been doing well in reducing the disturbance where the beach and/or dune meets or surpasses the design criteria. To begin the establishment of plants on the new dune areas, the contract includes planting American beach grass and saltmeadow cordgrass, Watson mentioned. Once that planting is completed, the borough can introduce more plant species.

A group of citizens has created a petition for a slope modification at various locations within the borough because of concern over the potential for increased risks to swimmers with the current slope formula utilized throughout most of the project area.

Many residents, including those behind the petition, have also requested a gentler slope at the busy Centre Street beach, but officials said they “cannot accommodate any further additional modified slope areas” due to practical mechanical restrictions and budget limits.

The standard slope design is intended to allow erosion for the beach to return to its more natural profile. This process should take only one winter season, officials said. However, residents worry this will not be the case in Beach Haven because replenishment is just starting in January. Officials reminded the public that the winter season continues through March.

Based on the contract, crossovers – made of a compressed sand, clay and gravel composite mix – are required at every street end.Three handicap-accessible beaches, at Centre, Fifth and Pearl streets, will have ramps with side rails and wheelchair-accessible mats down to the water.

Although some people have complained about the variability in sand laid during the different sections of the project, officials noted the grain size and quality of the sand obtained from offshore borrow zones are pretty consistent throughout the entire project. However, there may be slight differences based upon the location of the cuts in the borrow area.

Back-passing, an idea introduced by Surfrider Foundation member John Weber at last month’s council meeting, which would require moving the town’s “sugar sand” aside and putting it back on top of the sand laid down for the project, was also ruled out by officials because there is not enough sand in the arrangement to meet the design and construction requirements. The dynamics do not allow for creation of the template in full, they said. There is also not enough room on or adjacent to the beach to accommodate the logistics, and the costs would be “exorbitant.”