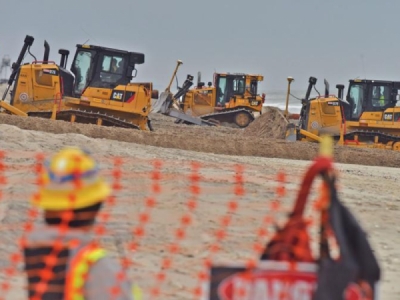 A trio of bulldozers move sand Tuesday on a beach in Salter Path on Bogue Banks. The work is part of an ongoing nourishment project that remains on track to be completed by its Tuesday, Apr 30 deadline despite wet weather late last week. (Dylan Ray photo)

BOGUE BANKS — The $20.1 million beach nourishment stalled a bit late last week because of bad weather and sea conditions, but it’s still on track for completion well ahead of schedule.

Work should begin in Emerald Isle by about Wednesday, April 3. The contract deadline for completion is Tuesday, April 30.

Greg Rudolph, manager of the Carteret County Shore Protection Office, the agency responsible for planning and overseeing the project, said nourishment resumed Saturday after the delay, and by Monday, crews had passed the Ocean Club and Summer Winds condominium complexes in Indian Beach, headed east.

By mid-morning Tuesday, crews were working in front of Grand Villas in Indian Beach. Wednesday, work is scheduled to begin heading west again, through the rest of west Indian Beach toward Emerald Isle.

“The project is still going very well,” Mr. Rudolph added Tuesday, “and we’re supposed to have north wind for a couple of days, which is very good” because it flattens the water, making it easier for the dredge to work.

“It was a little cold on the beach this morning (Tuesday),” Mr. Rudolph added, with drizzle, temperatures in the upper 40s and winds gusting 20 to 30 mph, but he said crews are used to working in much harsher conditions.

“This is nothing for them,” he said. “Imagine working on the beach in the winter in New Jersey.”

Meanwhile, Mr. Rudolph said, “The Great Lakes Dredge and Dock Co. vessel Liberty Island is going to be joined even sooner than expected by the second dredge, the Ellis Island. It should arrive the first week of April. Both dredges will work to complete … east Emerald Isle.”

Emerald Isle, from the town’s border with Salter Path to about the Ocean Drive “dogleg,” is to get 617,231 cubic yards of sand along a stretch of about 3 miles. That’s about 65 percent of the total project volume of 945,000 cubic yards, which is why the second, larger dredge is needed to ensure the work is done by April 30, before tourist season really kicks off.

Great Lakes notified the town early this week it expected to begin receiving trucks and offloading pipe onto the beach at the Ocean Drive “dogleg” vehicular beach access ramp, near mile marker 15, Tuesday, and the town banned beach driving west of the ramp for the duration of the project.

The work is also delaying efforts by the town to repair 12 beach access walkways damaged by Hurricane Florence in September.

The entire project should cover a distance of about 5.2 miles, or about 27,700 linear feet of shore.

Indian Beach is getting 271,905 cubic yards split between the eastern and western ends of town, roughly about 29 percent of the total.

Salter Path, which is between east Indian Beach and west Indian Beach, is getting 56,410 cubic yards, or about 6 percent of the total project.

The project is designed to restore the width of beaches eroded over the past decade, a process accelerated by Hurricane Florence. Crews are basically creating new recreational beach, but will also restore eroded dunes and put in vegetation to hold the sand in place and trap more.

The work is being funded mostly through the county beach nourishment fund, which gets half of the revenue from the county’s occupancy tax.

There’s also a $5 million contribution from the state, authorized by the General Assembly, and each local government involved – Salter Path is unincorporated and as such is covered by the county – will pay a share based on how much sand each will receive.

The county is to supply $237,323 in general fund money for the Salter Path portion of the project. In addition, the county will cough up $11,932,779 in non-state money from the nourishment fund.

The Liberty Island arrived in the county March 8 and the first sand from the “borrow” site in the ocean off Atlantic Beach hit the strand in Indian Beach the same day, delivered from the dredge through a submerged pipeline to a pipeline on the beach.