North Hempstead gets more than $4M to dredge Manhasset Bay 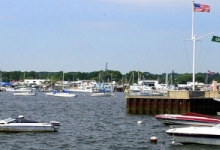 The has received more than $4 million in federal funding to remove sediment buildup in that officials said has blocked off parts of from boaters.

Following the 2012 storm, sediment buildup beneath the water near the Town Dock in Port Washington resulted in the town losing the moorings that allowed boaters to rope off their vessels.