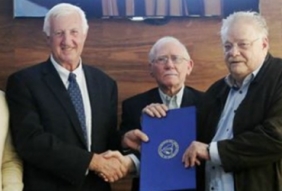 The Government of Nicaragua yesterday officially approved the Environmental and Social Impact Assessment (ESIA) for the Nicaragua Interoceanic Grand Canal Project and issued the “Environmental Permit” for the project.

Following the approval ceremony, Dr. Paul Oquist, the Executive Secretary of the Canal Commission and the Private Secretary for National Policies to Presidency of Nicaragua handed the environmental permit to the Chief Project Advisor of HKND Group, Bill Wild from Australia.

Telemaco Talavera, the spokesman of the Canal Commission said: “Today is a historical day for Nicaragua and will go down in history. This is a project that will bring significant economic, social and environmental benefits. It will not only benefit this generation of Nicaragua, but will also benefit future generations, even the whole world.”

After receiving the permit, Wild stated: “the ESIA process has been exhaustive and we spent longer completing it than we original envisaged, because we listened to the input we received about the design and made various changes that have improved it.”

”We are satisfied that it does all of those things and that we have produced an ESIA that the people of Nicaragua can have total confidence in. We’re really pleased that the project can now move forward with full speed and with the sincere support from many sectors of the country.”

Pang Kwok Wai, Executive Vice President of HKND Group, said that obtaining the environmental permit is a major milestone in the development of the project.“Currently the canal project is poised for a new phase of development.”

The ESIA represents the culmination of hard work carried out by hundreds of world-class scientists and environmentalists over a period of more than two years. Work on the ESIA commenced in June 2013 when HKND engaged Environmental Resources Management (ERM). The report was received by the government in late-May 2015.

Over the five months since submission of the report, HKND, ERM and the Government have worked together to refine the canal proposals to minimize environmental and social impacts and to agree to a regime of mitigations and offsets, all strictly in accordance with International Best Practice.

Initial estimates show that the project will directly or indirectly create up to 250,000 jobs during the construction phase. ERM confirmed in the ESIA report that the canal will have positive social impacts on the country.