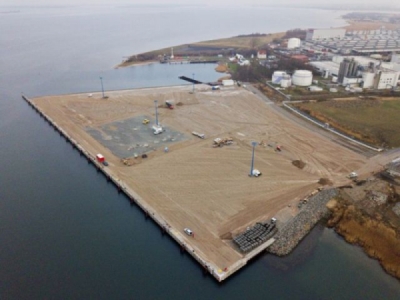 The new rail and road linked facility is part of a port development programme which is costing a reported €44 million overall and is one of the biggest investment projects ever in the port of Wismar. The German Government and the coastal state of Mecklenburg-Vorpommern (MV) have put up more than €30 million of the cost.

Officials said the new terminal opened up possible new overseas markets and also strengthened the port’s ability to compete and its significance as a maritime location. MV Minister for Infrastructure Development Christian Pegel said Wismar was “an important interface not only for Baltic traffic between Scandinavia and Central Europe but also for East-West traffic from Russia and the Baltic”.

The former GDR port, located midway between busy rivals Lübeck in the west and Rostock to the east, was left somewhat out on a limb after German unification in 1990 and needs to boost business. In 2017 it reported about seven million tons in sea and land handling sectors. Traditional salts and potash account for a quarter of that but timber expansion is also reported under consideration.

Work on the new terminal began in 2015. Some 260 sheet piles – 28m long, 1.4m wide and weighed 8-9 tons apiece – were driven to create the new quayside, 80 m from the existing shoreline. The area behind the new quay edge was then reclaimed and filled in.

In a related development, German authorities have pledged to consider funding the deepening of the port’s approach channel. That would facilitate the floating out of big new cruise ships from the MVW Shipyard, created some three years ago in Wismar and two other east German locations by Asian investors.