New commander stated for the Corps’ Fort Worth District 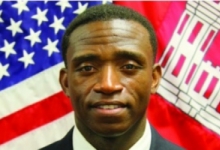 Col. Calvin C. Hudson, II assumes command of the U.S. Army Corps of Engineers, Fort Worth District, during a 1:30 p.m. assumption of command ceremony Aug. 14 at the Magnolia Ballroom, Sheraton Fort Worth Hotel.

Hudson takes over the district from Lieutenant Colonel Clay A. Morgan, who assumed command on a temporary basis since March. Morgan will return to his role as the district’s deputy commander.

A native of Atlanta, Hudson received his commission as an engineer officer upon graduation from in 1994. He is a graduate of the , , Combined Arms Services Staff School, Ranger School, as well as the Engineer Officer Basic and Advanced Course