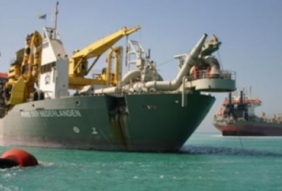 State-owned Mormugao port, located on India’s western coast, has dropped a plan to deepen its channel to berth so-called capesize ships (the biggest of the dry bulk carriers) on a public-private-partnership (PPP) basis after the solitary price bid received in a public tender exceeded the budget.

The project—to deepen the port’s outer channel to 19.8 metres and the inner channel to 19.5 metres and maintain the water depth at that level over the next 12 years—was the first attempt by a port in India to implement dredging work on an annuity basis, a concept followed in the highways sector. South West Port Ltd, a unit of JSW Infrastructure Ltd, quoted Rs.1,640 crore for the contract, 17.56% more than the Rs.1,395 crore budgeted by Mormugao. The OP Jindal Group firm tied up with Dutch dredging contractor Van Oord Dredging and Marine Contracting Co. NV to take up the work.

In the highways sector, the annuity method involves the payment of a fixed semi-annual sum to the project developer during the contract period to compensate him for the capital cost, operational and maintenance expenses plus a certain percentage of returns thereon. The private operator will be paid the annuity amount (determined through an auction) if he operates and maintains the facility according to the standards specified in the contract.

For the Mormugao project, the annuity amount was to be paid in 23 instalments spread over 12 years.

The board of trustees of Mormugao port, however, rejected the price quotation of South West Port. The board of trustees also decided to undertake the channel deepening work on a traditional engineering, procurement and construction (EPC) contract. Maintenance dredging will not be a part of the EPC contract.

The poor response to the annuity model—one price bid out of seven qualified bidding groups—is attributed to the bundling of channel deepening work (termed capital dredging) with maintenance dredging (maintaining the depth).

Dredging contractors, especially the Dutch and Belgium specialists in the field, stayed away because they were reluctant to be tied down with the maintenance dredging obligation for 12 years, given the uncertainty over foreign exchange fluctuations over such a long span.

Hedging the currency risk would have become necessary in such a situation, further raising the risk for the foreign contractor.

This exercise showed that the annuity method will not work for dredging contracts because of two reasons.

The commercial risk/traffic risk in this type of contract is assumed by the port and is not borne by the private dredging contractor.

Secondly, it is difficult to deduct the annuity payout in the event of non-performance by the contractor because it is difficult to know the quantity of siltation in the channel, compared with a highway project where potholes and congestion can be easily detected.

The channel deepening work on an EPC basis is estimated to cost Rs.380 crore. Cash-strapped Mormugao, hit by a ban on the production and export of its mainstay iron ore cargo from India’s top producing state since October 2012, plans to fund the capital dredging project through a Rs.200 crore loan from Jawaharlal Nehru port and another Rs.100 crore from New Mangalore port—both are state owned.

The annuity plan, no doubt, was innovative. If successful, it would have helped Mormugao stagger its dredging expenditure over the next 12 years while getting a private dredging contractor to deepen the channel and also maintain it during that period. In dredging works done on EPC model, the private contractor is paid on completion of the job.

A deepened channel would have allowed Mormugao to dock capesize ships, bringing freight advantages to customers because larger quantities can be shipped at a time.

Capesize vessels are carriers named after the route they take to bypass the Suez Canal. This route takes them past the Cape of Good Hope in Africa or Cape Horn off of South America.

Private terminal operators such as South West Port and Adani Ports and Special Economic Zone Ltd (APSEZ), which runs facilities at Mormugao and which are also users of coal shipped through these terminals, would gain from deepening the port’s channel.

Mormugao planned to recover the dredging expenditure by collecting a special dredging levy on ships calling at its berths 5, 6 and 7 in two slabs—one between 60,001 to 75,000 gross tonnage (GT) and the other for 75,001 GT and above.

The Tariff Authority for Major Ports (TAMP), the rate regulator for state-owned ports such as Mormugao, had approved a special dredging levy for ships falling under the first slab at Rs.119.05 per GT for foreign going vessels and Rs.71.43 per GT for Indian coastal vessels.

The special dredging levy for 75,001 GT and above ships was set at Rs.158.73 per GT for foreign going vessels and Rs.95.24 per GT for Indian coastal vessels.

However, with the channel deepening work to be executed on an EPC model, the proposed special dredging levy will also undergo a change.

The failure of the annuity model for dredging at Mormugao could force other state-owned ports that were looking to try out this method to abandon such plans.