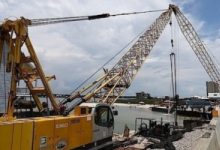 Heavy equipment will begin to roll at Little Lagoon Pass in Gulf Shores this week with an ongoing dredging project ramping up additional sand-digging efforts.

The area has seen a steady stream of construction equipment since December 2013 when a $12.1 million project began to replace the Lee Callaway Bridge. While the new span opened on April 20, crews still had to dismantle a temporary bridge and then on June 2 the current dredging project started.

Under a 1992 court order, the state highway department is required to keep the pass dredged to a depth of 3 feet to allow the free flow of saltwater into Little Lagoon, a 2,480-acre, ecologically vital coastal lake.