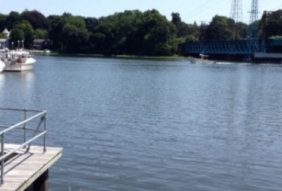 The Army Corps of Engineers is preparing its recommendations on how to handle material dredged from the Mianus River and other sites in Connecticut — as the fate of the project faces a major decision on whether Federal environmental regulators will authorize continued dumping in Long Island Sound.

Meanwhile, opposition from New York state is mounting to the proposal to dump millions of tons of silt from Connecticut waterways into two pits in eastern Long Island Sound. The fate of the badly clogged Mianus River channel hangs in the balance.