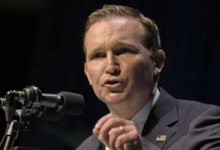 Mayor Lenny Curry disbanded a City Hall task force created by his predecessor that was examining the controversial project to dredge the St. Johns River, saying he instead wants to work directly with JaxPort officials to see the $700 million project through.

In June, task force co-Chairman John Baker had said he and Curry spoke directly and that the mayor had given the group his blessing to continue its work, while Curry said in a statement at the time he was going to “look ahead at how best to proceed.”