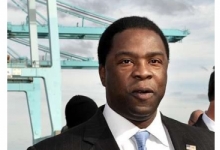 Mayor created the task force last year to vet the divergent views about the project and help determine “how we make the financial investment necessary to achieve the harbor deepening.” But since his election defeat last month, the group hasn’t met – canceling two of its scheduled meetings.

Although the task force draws primarily from the business community – only two of the 15 spots are environmental voices – the group has nonetheless voiced concern for the potential environmental risks involved in deepening the 40-foot shipping channel to a 47-foot depth and called for far more resources to be set aside for those purposes than JaxPort or the originally planned.