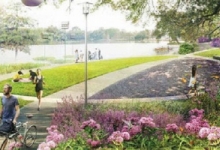 By David LaPlante, The Daily Reveille

After revisions at a series of community meetings, the Master Plan, presented by the on July 16, to revive and replenish the Baton Rouge Lakes has been completed. The Master Plan comprises two phases of construction including several projects focused on the health and practical use of the lakes, according to BRAF’s executive vice president John Spain.

“Historically, they weren’t lakes,” Spain said. According to the website set up by BRAF for the Lakes project, the land the lakes occupy was donated to the University in the mid-’30s on the condition that the swamp be turned into public lakes and parks and kept that way. “If someone doesn’t step in, they will revert to swampland,” Spain said.