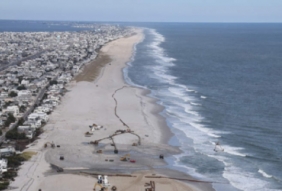 Current beach replenishment work on Long Beach Island was initially, under the base contract with Great Lakes Dredge and Dock Co., required to be complete by April 12, 2016. However, due to “weather delays and the need to repair areas damaged by the recent storm, we have extended the contract,” U.S. Army Corps of Engineers spokesman Steve Rochette noted on Tuesday. “The required completion date is now approximately May 21, 2016.”

The recent renourishment efforts began in Ship Bottom in early May, then moved to Long Beach Township. As of Monday, Nov. 2, beachfill discharge was between 75th and 77thStreets in Beach Haven Crest. The dredge Liberty Island has departed the LBI project, and is expected to return in January, while the dredge Dodge Island remains.

This segment of the project, from the previously constructed beaches at 57th Street in Brant Beach to Nebraska Avenue in Beach Haven Park, had been scheduled for completion in mid-November, but that date will also move back because of the weather and storm repair delays.

As for the remaining areas awaiting sand – the Loveladies and North Beach sections of the township, and Beach Haven and LBT’s Holgate section to the south – the timeline is uncertain. According to Rochette, “There’s been no determination ?on the next location for beachfill operations at this point.”

Operations had been scheduled to subsequently move to either Loveladies or North Beach, with Beach Haven and Holgate slated for beachfill to begin around January. However, as Rochette said last week, “The USACE is “waiting to see when (the N.J. Department of Environmental Protection) will be able to provide the easements that enable us to build the project in the two northern areas (Loveladies and North Beach). Once all of the real estate easements are in hand, Great Lakes Dredge & Dock will determine how they will complete the project in the most expeditious manner.”

Township Mayor Joseph Mancini pointed out at a recent meeting, “The state of New Jersey, over the last months, has filed eminent domain on all of the Loveladies and North Beach (easement holdout) properties for the beach replenishment. That process is going to take awhile, because there’s been different guidelines as far as negotiations for the north end.”

According to the municipality, as of last week, there were 32 holdouts in Loveladies and North Beach.

Meanwhile, all easements are acquired for the southern portion of the township.

“In July, the state filed its first eminent domain actions against beachfront property owners to secure easements that the U.S. Army Corps of Engineers needs to build engineered beach and dune projects to protect lives, homes and businesses in the state’s economically vital coastal communities from severe storms and flooding,” the DEP explained earlier this year.

“Owners of beachfront properties up and down the coast have overwhelmingly stepped forward and done the right thing,” said DEP Commissioner Bob Martin. “Unfortunately, a few holdouts continue to refuse to provide easements, forcing us to seek condemnation of portions of their properties so we can move forward with projects that will protect lives and property.”

The state, Rochette said Tuesday, expects to have the real estate in place before Great Lakes completes work in the current section.

All remaining sections of the project will undergo construction in the late fall and winter timeframe, with all areas to be completed by the new finish date of May 21, 2016.

The Army Corps awarded a $128 million contract to Great Lakes in December 2014 to complete initial construction of the LBI project, a joint effort between the Army Corps and state DEP that had been only partially completed when Sandy hit. As noted on the Corps website, nap.usace.army.mil, “The Army Corps completed the initial construction of the project at Surf City in 2006; Harvey Cedars in 2010; and Brant Beach between 31st and 57th Streets in Long Beach Township in 2012. The Army Corps repaired beaches in Surf City and Harvey Cedars in 2012 after Hurricane Irene, and fully restored the beaches within all three communities after Hurricane Sandy in 2013. The restoration and repair work was funded 100 percent through the Army Corps’ Flood Control and Coastal Emergencies program.”