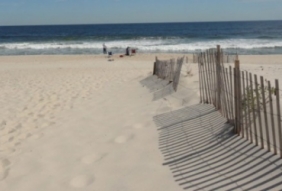 By Patricia A. Miller, Patch

Great Lakes Dredge and Dock Company’s contract with the Army Corps of Engineers originally called for a finish date of April 12, 2016. But the Army Corps recently extended the completion date to May 21, 2016, spokesman Steve Rochette told The Sandpaper.

Replenishment efforts began in Ship Bottom in early May, then moved to Long Beach Township. The work recently was between 75th and 77th Streets in Beach Haven Crest. The dredge Liberty Island left the LBI project, and is expected to return in January, while the dredge Dodge Island remains.