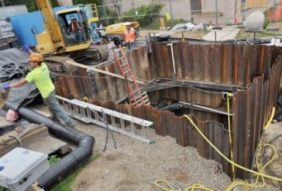 By Jim Lynch, The Detroit News

Bob Johnson has little hope that an environmental problem will be fixed by the massive hole that’s been dug at the intersection toward the end of his block.

Crews have been out there for several weeks digging to remove a pair of manhole vaults — the latest effort in nearly 15 years of work aimed at solving a major local environmental riddle. Polychlorinated biphenyls (PCBs) have contaminated two of the city’s canals leading to Lake St. Clair since 2001, keeping residents from swimming or fishing and raising fears about the loss of home value.