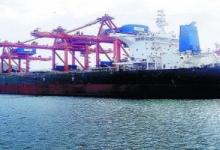 has added yet another feather to its cap when it received m.v. Han Fu Star, the larges-ever bulk carrier it berthed in its history.

Since it was made operational in 1933, the port received largest-ever Cape vessel generating a lot of interest among port community. General Cargo Berth Private Limited (VGCBPL), one of the BOT operators of Visakhapatnam Port, received the bulk carrier from carrying steam coal for limited on Friday. The ship’s over all length is 291.80 M. The discharge will be completed on Sunday.

Due to mechanisation, there is heavy demand for coal importers to use the facilities at Visakhapatnam Port particularly the Vedanta berth (VGCBPL) from various parties in South Africa, Australia and Chile. “Due to port’s emphasis on handling non-polluting coal, we have restricted imports only to high quality coal,” Mr. Manral said.

VGCBL which commissioned the fully automatic coal terminal in April 2013 received the first Cape vessel without lightening after completion of dredging in the Outer Harbour on March 9, 2014. It has so far handled 13 million tonnes.

The Outer Harbour dredging was undertaken by the port by engaging International Seaport Dredging Ltd at a cost of Rs.139.88 crore. The Inner Harbour dredging is on verge of completion to increase the draft to 14 metres. Soft and rock strata dredging are undertaken separately by and Dharti Dredging.