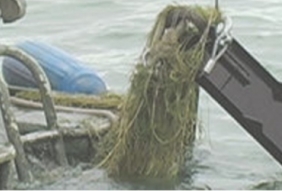 The Lake Havasu Marine Association dredged the lake on New Year’s Eve last year, working until 10 p.m. If they didn’t finish on New Year’s Eve, they would have to wait another six months before trying again.

The Marine Association’s dredger managed to complete most, but not all of the job on New Year’s Eve, and the dredger returned to the lake early this summer. The Marine Association is finalizing its dredging operation this week in the hope of completing the job before the Monster Bash poker run later this month.