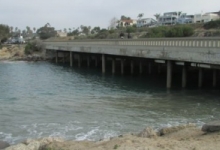 Earthmovers will be at the lagoon inlet to dredge and disperse accumulated sand from Thursday, June 4 through Friday, June 12.

“Tidal circulation is significantly muted as a result of sand buildup under the coast highway bridge and in the main channel.”

The small opening, just south of San Elijo State Beach Campground, is the lagoon’s only access to the Pacific Ocean. Left unattended, it could remain closed much of the year from buildup of sand by high incoming tides and surf. The cooler winter and spring weather help keep oxygen levels in the lagoon in the safe zone, but as temperatures rise in late spring and the demand for oxygen increases, an inlet operation is conducted. The inlet excavation is scheduled so as not to interfere with grunion spawning.

Dredging is like watching giant beach toys sculpt the lagoon’s opening. The excavation costs approximately $100,000 and is done through the support of California Coastal Conservancy and County of San Diego Department of . Excavation involves relocating about 25,000 cubic yards of sand out of the lagoon inlet and back onto the beach. Sand removed from the tidal channel will be deposited south onto Cardiff State Beach.

It has been decades since San Elijo Lagoon was naturally connected to the Pacific Ocean. The first bridge and berm crossing the lagoon was built in 1887 for the , followed by Pacific Coast Highway in 1891, and the completion of in 1965, which divided the wetland in half. This “partitioning” of the lagoon alters flows for both fresh- and saltwater, leading to accelerated sediment deposition, reduced water quality, and a reduction in native estuarine habitats because of increased runoff from development upstream.

Several fish populations, including halibut, depend on the lagoon as a nursery. Stagnant water also can trigger a rise in mosquito populations, which is why the county covers part of the project’s costs.