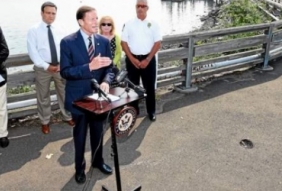 A draft plan that looks ahead at the dredging needs of harbors and marine businesses along 322 miles of shoreline has gotten the approval of the state’s congressional delegation, as well as state and federal environmental agencies.

U.S. Sen. Richard Blumenthal, D-Conn., spoke in favor of it Thursday in a press conference held at New Haven’s pier on Long Wharf Drive, pointing out that 35,000 jobs are dependent upon the recreational and commercial uses along .