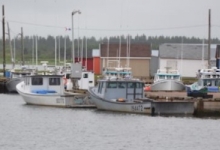 Major improvements are coming to Tignish Harbour, including dredging and realigning the channel, installing shore protection, replacing a wharf and constructing a new marginal wharf.

“The Tignish wharf is one of the busiest in-shore harbours in and these projects are very important for our harbour activities,” said Russell Gallant, manager of Judes Point/Tignish Harbour Authority. “The new wharf structures will help address overcrowding at the wharf. The channel dredging and installation of armour stone will help reduce sedimentation and provide better access for fishermen to our inland wharf structures at Jude’s Point.”

Funding for the work will come through the federal government’s investments in small craft harbours.

Tignish is one of 23 harbours in to benefit from the funding.

In the last six years, $2.4 million has been invested at Tignish Harbour.