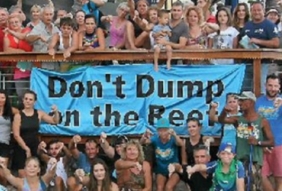 TALK about dredging at Abbot Point has been one of the main points of contention along the long-winded road to gaining expansion approval.

The definition of dredging is to clear the bed of an area of water by scooping out mud, weeds, and rubbish with a dredge.

But while the current government proposal requires less than 3% of the dredging than what was first proposed, The Australian Marine Conservation Society Imogen Zethoven argued, it would still have detrimental affect.

“It’s dredging on an industrial scale,” she said.

“You can hide a lot with percentage numbers.

“(But it will still) harm a seagrass areas where dugongs graze.”

But Federal Member for Dawson George Christensen “rejects the accusation” having a dredging campaign near the reef would destroy it.

“Most ports engage in dredging, and you don’t hear anything about it from the green groups,” he said.

“The reality is, any dredging can be done in a manner that does not cause a major water quality issue.”

Bowen Business Chamber chairman Bruce Hedditch believed it was because most other ports encouraged tourism that their dredging campaigns did not bring backlash.