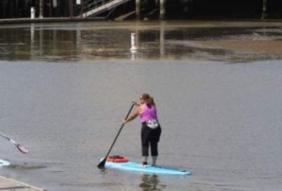 Petaluma’s Congressman, Jared Huffman, D-San Rafael, has issued perhaps his strongest appeal yet for federal funding to dredge the Petaluma River, a long overdue project that impacts commerce and recreation on the city’s waterway. The call came amid a changing political climate in Washington and tepid support for a local source of funding for the dredging work that has traditionally been the responsibility of the U.S. Army Corps of Engineers.

In a letter last week to the Corps of Engineers and the Congressional Office of Management and Budget, Huffman requested that the Petaluma River project be included in the 2016-17 federal budget. He cited the river’s importance to commercial shipping as well as for flood control. The river, which had been dredged every four years, hasn’t received the work since 2003.

SANTA BARBARA, Calif. – The Santa Barbara harbor has closed to allow the just-arrived dredge to dig in on a project where sand has blocked most boats from going in and out. The sand bar developed in the recent series of storms. Harbor Patrol Lt. Nathan Alldredge was at the controls of a patrol boat… Read More