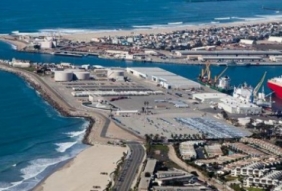 The Port of Hueneme has just won a $12.3 million Transportation Investment Generating Economic Recovery (TIGER) grant from the Department of Transportation (DOT).

The TIGER grant for the Port of Hueneme will be used for the intermodal improvements, including the deepening and strengthening of the wharfs and berths, modernizing cargo infrastructure, and on-dock rail improvements.

The grant is a critical component of the Port’s Intermodal Improvement Project which will allow for larger-capacity vessels, increased cold storage and cargo handling capability to support increased agricultural imports and exports, and on-dock rail that will allow for efficient transfer of cargo.

In Fiscal Year 2015, there were 625 applicants, requesting $10 billion. However, DOT only has $500 million to award, making the grants extremely competitive.

As the only deep water port between Los Angeles and San Francisco, the Port of Hueneme is critical to the West Coast’s trade infrastructure.