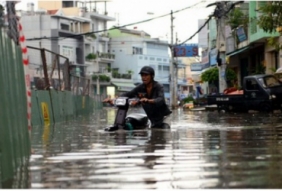 With a total area of 100ha, the three proposed reservoirs are expected to accumulate tens of millions of cubic meters of water and resolve the flooding problem in District 4, Tan Binh District, and Thu Duc District.

The construction plan, which will be executed in 2016-20, will come along with other measures like canal dredging, better sewer system installation, and the building of new sewage plants.

What is more, the city will also expand some existing artificial lakes in many parks into reservoirs for water regulation.

However, these are the projects that will be implemented in the distant future.

Some experts told local news website VnExpress that the current solution to raise the level of roadbeds is merely short-lived as it just moves inundation from one place to another.

As a result, if implemented uniformly the construction of the new reservoirs and the upgrade of the existing lakes will help store up to tens of millions of cubic meter of rainwater and cut flooding by 30 percent, VnExpress reported.

In August, Prime Minister Nguyen Tan Dung asked the southern city to solve the flooding problem in the next five years with a focus on rectifying the situation in the downtown area.

The head of the government also directed the municipal authorities to closely manage the construction of reservoirs for water retention, boost the dredging of canals, and restrict the extraction of groundwater to avoid subsidence risks.

According to officials, the total loans granted to prevent flooding in Ho Chi Minh City had topped VND25 trillion ($1.1 billion) by the end of 2014.

This means that in the next five years, the city will pay the principal and interest of about VND4.25 trillion ($187 million) per annum.