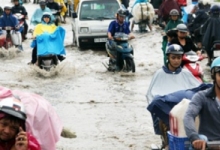 In the past 10 years, has invested about VND24.3 trillion (more than $1.14 billion) in flood prevention projects. However, just 1.2% of the total workload of these plans have been completed so their effectiveness is beyond expectation.

As reported by the HCM City People’s Committee, the amount, including VND9 trillion from the budget, and VND15 trillion of official development assistance (ODA), was spent in dredging, renovation of canals, and construction of sewers.

By the end of 2014, the city’s total debt balance reached over VND25.1 trillion. In the next five years, the city will have to pay approximately VND4.25 trillion of debt each year.

To carry out projects to prevent flooding for an area of 550 km2, including the downtown area, the north, the west, part of the Northeast and Southeast, in the next five years, the city needs to raise about VND66.82 trillion. The money will be used to construct drainage and wastewater treatment works, such as dredging Tham Luong – Ben Cat – Nuoc Len canals, renovating Xuyen Tam canal, and building 7 wastewater treatment plants and 3 lakes in , and District 4.

The city plans to mobilize VND7.5 trillion from the budget and over VND15.88 billion from other sources. The rest will come from ODA and loans from the state bank.

According to the city, the main reason for flooding is climate change, which causes more rainfall and high tides. In addition, the urban planning of Saigon before 1975 was designed to serve a population of 2 million while the current population is over 10 million.