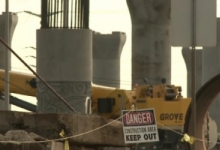 Bids for the station group contract were opened in March. Hawaiian Dredging Construction Company was the apparent low bidder. The second-lowest bidder filed a bid protest that was denied by HART. That company then filed an appeal in April with the state Department of Commerce and Consumer Affairs (DCCA). The DCCA ruled in HART’s favor on May 28. These challenges delayed the award by about three months.

The original nine-station contract was broken into three smaller contract packages to encourage broader participation by contractors during the bidding process and create more competitive prices.

Contract bids for the West Oahu station group, consisting of the East Kapolei, UH-West Oahu and Hoopili stations, will be opened at HART’s offices, 1099 Alakea Street, at 2 p.m. Tuesday, June 16.

A request for contract bids for the Kamehameha Highway station group, which includes the Pearl Highlands, Pearlridge and Aloha Stadium stations, will be issued in August.