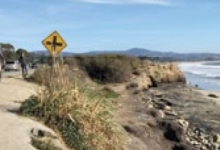 After more than 50 years of Surfer’s Beach slowly eroding away, the San Mateo County Harbor District has opted to take charge of efforts to replenish sand and deter further damage caused by the construction of Pillar Point Harbor.

The district’s Board of Commissioners unanimously voted last week to take the local lead agency status of a pilot project to replenish sand at the popular site immediately south of the outer harbor jetty, which was constructed in the late 1950s and has slowly led to the degradation of the beach.