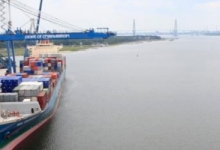 Another week, another key step forward for the Charleston Harbor deepening project.

The on Wednesday allocated $1.3 million for the Preconstruction Engineering and Design (PED) Phase of the Post-45 Harbor Deepening Project.

“The allocation of federal funding for the PED phase of our deepening project is tremendous,” said S.C. Ports Authority Board Chairman Bill Stern. “We are grateful to the leadership of state and federal elected officials and the for their united support of Charleston’s harbor deepening. The merit of our project and the significant benefits it will deliver for our state and nation are signified by the efforts of elected officials on all levels to ensure it progresses without delay.”

Unveiled in October, the plan calls for the Charleston harbor to be dredged to a depth of 52 feet, making it the largest port on the East Coast and allowing it to accommodate even the largest cargo ships coming up from the without concerns.

“The container shipping industry’s deployment of big ships is evident, and there is no question that the Southeast needs a harbor deeper than 50 feet to accommodate fully-loaded post-Panamax container ships,” said S.C. Ports Authority president and CEO Jim Newsome. “SCPA will soon be able to handle these vessels without tidal restriction, ensuring we can support growing volume needs. The US Army Corps of Engineers’ timely response to this dominant industry need is admirable, and we look forward to the completion of PED followed by significant progress on construction by the end of the decade.”

The Army Corps and Ports Authority’s proposal goes back under public scrutiny for another 30 days beginning this month in order to gather additional feedback from the public on the plans.

Today’s funding approval allows work to proceed in order to finalize the project design and produce contract documents even while that scrutiny is taking place.

Work completed during the PED phase represents the final major step in the deepening process before actual construction begins.

U.S. (R-SC) today was pleased with the news.

“Today’s $1.3 million allocation is fantastic news for the and for expediting the deepening project,” said Graham. “I again applaud the Army Corps of Engineers for amending its FY 2015 work plan to include funding for the Port. This money is yet another sign of the Port’s value to the country as a whole and a welcome step toward ensuring construction and eventual completion.”

In September, the S.C. Ports Authority and Army Corps of Engineers will incorporate new input from the upcoming public input period into a report for final approval from the Army Corps chief.

If the project gets an OK from the Army Corps’ top brass, it will then go before Congress to receive final approval and appropriation of federal funds.

The total cost estimate for the entire completed project is $509 million, with the state responsible for the majority ($366 million) of that funding.

Total PED phase costs for the project are estimated at $4.5 million, according to the S.C. Ports Authority. They are divided equally between federal and state government. The in 2012 set aside the state’s share of the design and construction costs.