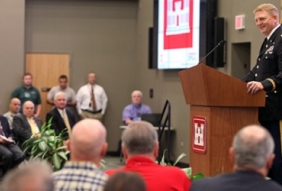 “I am a geek at heart,” Green said during a ceremony Thursday as he assumed command of the country’s premier engineering facility.

Green first visited the labs at ERDC more than a decade ago when he was researching how a special type of spray foam could potentially reduce injuries and deaths in areas of the world still heavily covered in landmines.

“I wanted to spray them on the ground and see if we could use the surface pressure so soldiers and civilians and children could walk across all these minefields instead of being blown up,” Green said.

A few years later, he was with U.S. Army Construction Engineering Research Laboratory when he asked his commander “wouldn’t it be cool to be the commander of ERDC?”

“I said ERDC sounds interesting but let’s talk about the other options. We never got past ERDC,” Green said.

While in Korea, Green led a workforce of more than 750 people with an overall program in excess of $15 billion. Still, he brought another $150,000 in funding into the district.

“I’m one of these commanders where I have a sense of business and business opportunity like you wouldn’t believe,” Green said.

“This won’t be the last you’ll see of me. I will continue to serve you and my new boss for the foreseeable future,” Tucker said.