GE to Soon Wrap Up Years of Dredging Work on Hudson 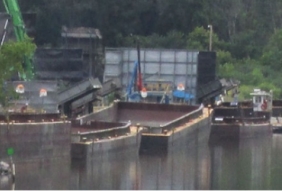 After seven years, dredging on the Hudson River is nearly over.

“The Hudson River dredging project will be completed within days,” said Mark Behan, whose firm was hired by GE to handle public relations for the project.

But the debate is just getting started over what to do with the 110-acre plant that has processed millions of cubic yards of PCB-laden sediment.

GE recently published a draft proposal on how to dismantle its plant. The company is willing to leave behind valuable infrastructure, including roads, rail and stormwater pipes.

But there’s a catch.

The various parties that own the site, including Washington County and the towns of Kingsbury and Fort Edward, must sign maintenance agreements that detail who takes care of each item.

The site is primarily controlled by WCC, a partnership formed by the owners of the land. They lease the land to GE, and when GE is done with it, they want to market it as a tech or industrial park. For that, they need as much infrastructure as possible to be left behind.

The company made no promises that it could leave all the infrastructure. It must test for PCB contamination first, then try to scrub clean the roads, buildings and other infrastructure. If the cleaned materials still test positive for high amounts of PCBs, they will be ripped up and shipped off for disposal in Waynoka, Oklahoma.

Above all else, Fort Edward Supervisor Mitchell Suprenant is hoping the railroad tracks will pass the contamination test.

“We definitely want the rail line. Without the rail, it’s no longer a unique park,” he said. “We think that’s a key asset.”

The only other items he absolutely needs, he said, are the roads and the power. Nothing else would be essential to turn the site into a commercial park.

The public can comment on GE’s draft plan through Oct. 5, and comment they have. Various groups are still pushing for GE to leave the site operational, so that the company could use it for future dredging.

Some groups want it to also dredge areas including the Champlain Canal, which is in the Hudson River in that area. The deeper trough for the canal has partially filled with sediment that likely includes PCB contamination.

GE, through Behan, said it won’t do any more dredging.

“The U.S. EPA has said no further dredging is necessary,” Behan said. “Contrary to the baseless speculation of the trustee agencies, EPA, which has approved and overseen every aspect of this project, has determined that the dredging project has achieved its goals of protecting the environment and public health.”

EPA officials have also said that future dredging, if needed, could be done without using the large dewatering site because the company won’t need to process large amounts of PCBs.

GE is siding with local officials who are eyeing the site for economic development. Behan said that would be a better use than leaving it for possible dredging projects.

“To retain an unneeded facility serves no purpose, will deprive the owners of the property on which the facility is built and the local community of future economic opportunities they wish to pursue, and is contrary to the agreements GE has with EPA and with those landowners,” he said.

Turning the site into some other commercial use is at the center of the plan to dismantle GE’s dredging facilities.

The company would try to leave many valuable items, even capping stormwater pipes so the next user could hook them up if they desired.

Several buildings would also likely remain, although they wouldn’t be move-in ready.

“All buildings would likely require some modification to be used in the future,” EPA spokeswoman Larisa Romanowski said.

But maintenance is key — particularly for a new road, Lock 8 Way. It is essentially a temporary bridge, so it was not built to stand the test of time, according to the draft plan. Owners would need to take care of it, Romanowski explained.

“There is a temporary two lane bridge over a creek. With proper care, the bridge could last for many years,” she said.

Suprenant said he’s hoping Washington County will take over the road and bridge, which cross through Kingsbury and Fort Edward.

“We want the EPA to turn over the access road to us,” he said, adding that the county would be the best choice. “It’d be easier, since it was through two towns, for the county to accept it.”