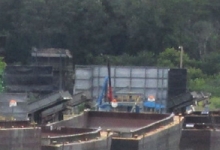 GE might leave behind some of the infrastructure it built at the Fort Edward dredging facility, in response to requests from local officials.

Local leaders hope to market the once-vacant site to businesses. It would be cheaper and easier for new commercial development to move in if the roads, utility hookups and railroad track remained.

The final decision rests with the federal . The original dredging agreement called for GE to remove everything from the site when work finished, but the EPA’s project director said Thursday the agency will likely allow GE to leave much of the valuable infrastructure behind.