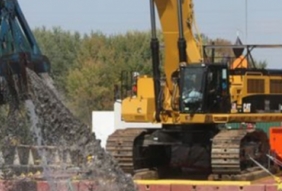 General Electric announced its historic dredging project to remove PCBs from the Hudson River has been completed. But environmentalists said they won’t let GE put the contamination issue in the past tense, calling the company’s declaration “premature.”

GE posted the announcement, titled A Historic Achievement, on its dredging project website this week, stating that the initiative, launched in 2009, removed “the majority of PCBs from the Upper Hudson River in one of the largest and most successful environmental dredging projects ever undertaken in the U.S.”

GE dumped up to 1.3 million pounds of PCBs in the Hudson between 1947 and 1977. The company had dredged PCB-contaminated soil from the bottom of the upper Hudson since 2009, aiming to remove 2.65 million cubic yards of sediment by this fall. Environmentalists and local municipalities had urged GE to continue the cleanup beyond that goal.