Funding for JaxPort Deepening Project Due Within a Year 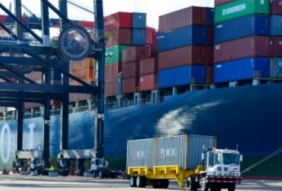 Container cargo through JaxPort could triple by 2035. Nearly 14,000 new jobs could be created. The regional economic impact could top $850 million per year.

But before that can happen, $684.2 million must be spent to deepen JaxPort’s shipping channel. A bit less if the scope of the project is scaled back.

The first installment of that money needs to be on the table within a year or else JaxPort will fall off a timeline, an outcome that would affect market confidence.

“I don’t think we’re running out of time as we sit here today,” said JaxPort CEO Brian Taylor. “On the other hand, if we were to reach a point in time where our customers see we’re not moving and other ports are, then I think that’s the tipping point.”