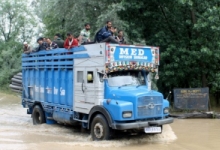 Almost 10 months after the devastating September deluge, the J&K Government has taken no major initiative to mitigate the looming flood threat even as a flood alert was sounded in the region on Wednesday —- second time in the past four months.

Nothing much has so far been done by the government for dredging and desilting the Jhelum, flood spill channel and other major tributaries of the river to clean up its base and increase the carrying capacity of the water bodies. The carrying capacity of the Jhelum has reduced considerably due to the September deluge last year as tons of silt was accumulated in the water bodies.