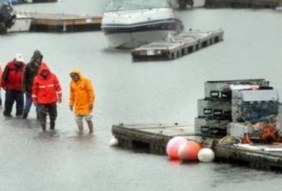 At extreme low tide in the middle of York Harbor’s north basin, so much silt has collected that people can walk from a float onto a sandbar and appear to be walking on water. The town’s Harbor Board is poised to try to rectify this concerning problem in the north basin and elsewhere in the harbor that is limiting moorings and impacting fishermen and the boating community.

But they’re going to need a federal funding miracle to make it happen.

It’s been 19 years since York Harbor has been dredged, a necessary scooping out of silt that comes from further upriver and builds up gradually. Dredging of all harbors in the U.S. is overseen and paid for by the Army Corps of Engineers, so York Harbor is competing with a Boston or a Baltimore or a Savannah for limited money. While the town can prove that York Harbor is a viable commercial harbor, with direct economic benefit exceeding $12 million annually, it can seem small potatoes to federal budget makers who can see more dramatic results in a larger harbor.