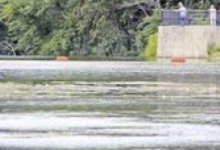 Plans for a major dredging of the Goshen dam pond are still in the works, though any actual dredging won’t likely happen until at least the spring of next year.Project leader David Troup, president of the Elkhart River Restoration Association, said that despite some hiccups with funding and timelines, the long-planned dredging project is continuing to move forward — if at a slower pace than originally anticipated.

In the works since December 2013, the goal of the dredging project is to restore the recreational use of the dam pond by removing sediment from the 140-acre pond that has accumulated over the past 150 years. The scope of the project consists of dredging approximately 34 acres of the pond to an average depth of six feet, where the average depth of the pond is currently only three feet.