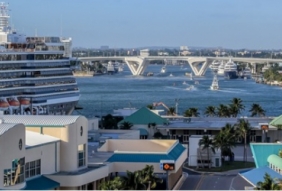 Port Everglades is the third busiest cruise port and 11th busiest freight port in the nation. And it’s about to get busier with plans to deepen and widen the port under way. In 2007, the Broward County Board of County Commissioners approved the Port’s Master/Vision Plan, which included a five-year capital improvement plan and ten- and 20-year Vision Plans, which has around $1.6 billion in capital investments.

The overall plan was, among other refurbishments, to restructure berths to accommodate larger cruise, cargo, and petroleum ships and expand cruise terminals to allow for mega-cruise ships to dock.