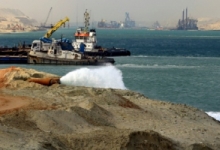 Egypt has finally agreed to widen and deepen a channel giving APMT’s (SCCT) direct access to the shipping canal’s northern end, after balking at the cost for a number of years.

Last weekend, as the (SCA) held a successful two-way traffic trial in the main canal, the authority’s head Muhab Mamish announced that the government would fund its share of creating a 9.5 kilometre channel from the container terminal to enter the Suez Canal at a point some 20 kilometres south of its northern entrance, allowing two-way traffic to and from the terminal.