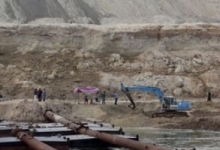 Egypt’s will open on Aug. 6, its overseer said on Saturday, a project President sees as a potent symbol of national pride and a major chance to stimulate an economy suffering double-digit unemployment.

The army began work 10 months ago on the $8 billion canal, flanking the existing, historic 145-year-old waterway and part of a larger undertaking to expand trade along the fastest shipping route between Europe and Asia.

The Suez Canal is a vital source of hard currency for Egypt, particularly since the 2011 uprising that scared off tourists and foreign investment.