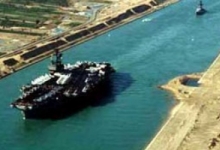 Egypt completed dredging for the new shipping route in the Suez Canal, which will be inaugurated on August 6th, according to a report from the armed forces published by Aswat Masriya on Thursday.

The flagship project of President Abdel-Fattah El-Sisi’s economic programme is set to open in August and will be attended by world leaders.

The government will fund the opening ceremony of the new waterway through donations from the public and contributions from participating dredging companies to avoid any burdens on the state budget, the head of the Authority, Mohab Mamesh, said last month.

Since taking office in June of last year, El-Sisi has embarked on an economic reform programme, restructuring the state budget in an effort to trim a ballooning deficit.

The mega-project to expand the Suez Canal, alongside plans to build an industrial hub and a supplies and logistics centre in the vicinity of the canal, are at the heart of El-Sisi’s development plans.