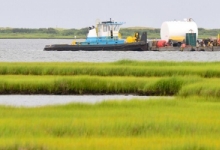 & Environment, the Lancaster-based environmental services firm, is one of seven companies awarded a $90 million contract from the .

The three-year contract, with an option for a two-year extension, primarily will pay for the cost of studying and designing clean-up projects at federal , as well as some oversight of clean-up work performed at the sites by the responsible party or parties, said Tim Grady, E&E’s vice president of business proposals. E&E’s portion of the contract is worth about $13 million, and it will keep from 15 to 20 of the company’s employees busy at any one time.

Most are in the ’s Region 2, which covers New York, New Jersey, and the U.S., with additional work in the Kansas City, Omaha and Seattle areas.

E&E has completed more than 600 projects valued at more than $200 million for the U.S. Army Corps of Engineers over the past three decades.