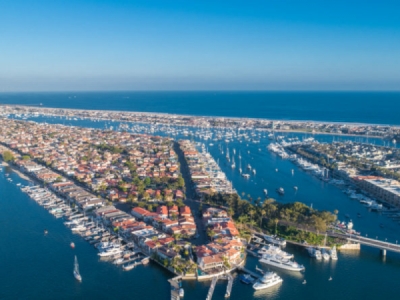 NEWPORT BEACH—The Army Corps of Engineers will begin a small dredging project in Newport Beach Harbor this fall, which will be a precursor to a larger, harbor-wide dredging project. Public Works Administrative Manager Chris Miller gave an update about the dredging at the July 8 Harbor Commission meeting.

“We’re going to be doing this project first and then demobilizing and then working on the larger, Lower Bay project,” Miller said at the meeting.

The Army Corps of Engineers will spend $3 million of their funds to dredge about 70,000 cubic yards at the entrance to the harbor channel, which was last dredged in 2003. Miller said the main entrance channel has an authorized depth of 20 feet and right now the channel is in the 16- to 17-foot range. He said the material in the area is clean, coarse-grain and beach compatible. The material will be disposed of in the near shore ocean zone, right outside of the surf line.

“So that material can be put up on the beach by Mother Nature, it’s a way to replenish our beaches, it’s a natural way of replenishing our beaches,” Miller said.

If any funds are left over, the Corps will start inching its way up the channel and start on a section dubbed the main channel north, where there is 80,000 cubic yards of material to dredge. The area is adjacent to the Balboa Yacht Club mooring field and the B field.

“We’ll get as far as we can given the funds we have,” Miller said at the meeting.

The material from the main channel north is fine-grain sand and would be deposited in LA-3, which is a site about 6 miles from the harbor entrance designated for disposal of clean material which is too fine-grain to make it up onto beaches.

The Corps will begin advertising the project in August and award a contract in September. The project is anticipated to begin in October or November with completion in March 2021.

The Corps will also begin repairs to the east jetty adjacent to Corona del Mar State Beach in October or November. The project will focus on a 700-foot long portion of the jetty. It includes work to repair the 12-foot wide concrete boardwalk and increase the height and the width of the rock revetment, which currently spans 15-feet wide and is about 2 feet below the concrete boardwalk. The work will bring the rock revetment to a similar height as the boardwalk.

“It’s just not in good shape, this is a pretty old walkway, it gets the brunt of every storm it seems and it just needs repair,” Miller said.

The beach will remain open during the work but a staging area on the sand will be blocked off to beach goers.

General Dynamics National Steel and Shipbuilding Co. (NASSCO), San Diego, Calif., has been awarded two Navy long-lead-time (LLT) contracts that together are worth $600 million. The larger of the two is a $500 million modification to previously awarded contract N00024-16-C-2229 to procure long-lead-time material in support of T-AO 211 and T-AO 212. The other is a… Read More

Long-awaited emergency dredging work to reopen Longboat Key’s Canal 1A near Greer Island will prompt the immediate closure to the public of the beach east of Longboat Pass Bridge for three weeks, town officials said in a news release on Monday. The town holds permits from federal and state agencies to dredge 1,000 cubic yards of sand… Read More

Dredging work will get under in the Gold Coast Broadwater in a bid to improve access and safety for marine vessels. Crews will remove a massive 20,000m3 over the next few months with a focus on the South Wave Break Island Channel. Monitoring of the channel by Gold Coast Waterways has found the channel depths… Read More

The Centre has approved the West Bengal government’s Rs 1,500-crore ‘Ghatal masterplan’, a mega project to dredge riverbeds and strengthen embankments of at least 10 major rivers in the state, a senior official said on Saturday. The Union government will bear 60 per cent of the expenses, while the state government will bear the remaining amount. “We have received… Read More