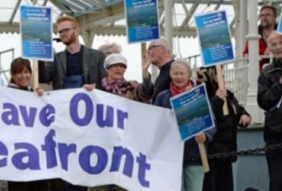 By Tim O'Brien, The Irish Times

Dún Laoghaire Harbour Company’s plans to create a 390m cruise berth and ancillary dredging are an “unquantified financial gamble”, a Bord Pleanála hearing into the plans has been told.

People Before Profit TD Richard Boyd Barrett said the harbour company proposals – to dredge a 1.5km harbour approach channel, a 500m turning circle to the north of the harbour mouth and an in-harbour access channel of 850m to the proposed berth – were costed at €18 million.

But he said that figure was less than the 1996 cost of building the smaller berth for the Stena HSS which is to be demolished as part of the scheme.