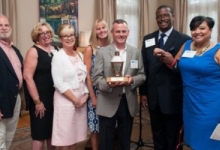 DSC Dredge, a Reserve, Louisiana-based manufacturer of dredgers was received the 2015 Lantern Award for the Bayou Region from Louisiana Economic Development.

DSC received the Lantern Award for demonstrating excellence in manufacturing and outstanding service to the community through the involvement of its business and employees. DSC was honoured on June 16 during a private reception at the .

Each year, eight companies are selected by Louisiana’s eight Regional Planning and Development Districts. Award winners are chosen based on criteria including the contributions of the manufacturers to their communities – such as investments in employment growth and expansion. Businesses are also required to operate continually for a minimum of three years before nomination.

“It is a pleasure every year to celebrate Louisiana-based manufacturers who demonstrate quality in their work processes and a commitment to their local communities,” said Steven Grissom, the state’s secretary for economic development.

DSC President and CEO Bob Wetta has worked with South Central in Reserve and donated drafting equipment to the local Riverside Academy to help establish a drafting school for young people interested in the field of design and drafting. Based on these displays of commitment to the community, Parish President Natalie Robottom chose to nominate the company for the Lantern Award.

UC San Diego’s Scripps Institution of Oceanography today announced that naval architecture and marine engineering company Glosten has been selected as the naval architect for the university’s new California coastal research vessel (CCRV). The new vessel will be an innovation in the maritime industry with a first-of-its-kind hydrogen-hybrid propulsion system. With this selection, Glosten will provide the… Read More

Even before it is formally delivered to the Navy, the future USNS Apalachicola (EPF 13) is performing a series of planned test events assessing autonomous capabilities integrated into the shipboard configuration, demonstrating that a large ship can become a self-driving platform. Shipbuilder, Austal USA was awarded a $44 million contract last June to deliver autonomous capabilities to the… Read More

With a busy year under their belt during 2021,The Marine Group’s Harbour Management department are continuing to expand their dredging fleet with a third vessel. The latest addition,‘Doonhamer’, is the largest in their fleet and can operate as either a water injection dredger or aplough dredger. At 48’ (14.6 m) in length and weighing 55tons,… Read More