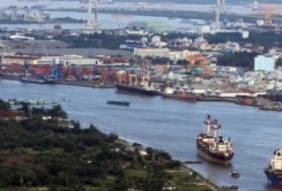 The congested waterways around Ho Chi Minh City are set for an upgrade. Local authorities have asked central government for loans of $380m to get dredging underway on key waterway, the Soai Rap, a tributary of the Saigon River. The dredging would allow vessels of up to 50,000 dwt call at Vietnam’s second city.

The 54 km long Soai Rap links the city to the sea, but is the victim of severe sedimentation. It was last dredged three years ago, but has since quickly silted up.