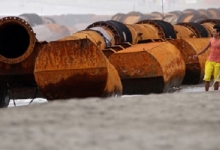 The here faces a blank wall on a dredging machine pipe which was apparently swept by strong waves that ended up in Barangay Baroro Saturday afternoon.

Milky Ocampo, a resident of the town, said that he saw it floating in the sea waters at about two to three in the afternoon, “Maybe it was slowly swept here on the shore.”

Residents described the pipe as 400 meters in length and bigger than an average man and was supposedly used as a dredging machine, compared to that being used by the Chinese, who are in a stand-off with the over several island territories in the .