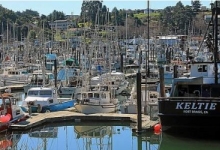 The Noyo Harbor District, with the help of their SHN Consulting Engineers and , has finally navigated the regulatory maze needed to get permission to dredge its mooring basin this fall.

District Manager Jere Kleinbach told commissioners last week that was the good news. The bad news is that bidding closed last week with only one contractor putting in a bid, he said. That bid came in considerably above the estimate, meaning the district will need to go back to federal and state regulators and get more money and permission to spend more.